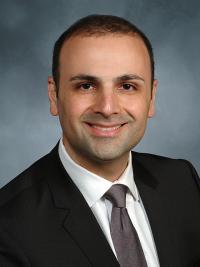 Dr. Babak Sadoughi is a nationally known specialist of voice disorders. He is the James A. Moore Clinical Scholar in Otolaryngology-Head and Neck Surgery, as well as an Assistant Professor of Otolaryngology at Weill Cornell Medical College, and an Assistant Attending Otolaryngologist at NewYork-Presbyterian Hospital.

A fellowship-trained laryngologist serving as a full-time faculty member at the Sean Parker Institute or the Voice, Dr. Sadoughi has advanced expertise in the care of all disorders of the larynx (“voice box”), encompassing voice medicine and surgery for professional vocal performers, treatment of benign, malignant and paralytic diseases of the larynx, voice restoration after injury or surgery, and airway and swallowing rehabilitation surgery. He also specializes in the diagnosis and management of the full spectrum of adult otolaryngologic and head and neck diseases.

Prior to joining Weill Cornell Medical College, Dr. Sadoughi was the Director of Laryngeal Surgery and Voice Restoration services at Beth Israel Medical Center, as well as an Assistant Professor of Otolaryngology-Head and Neck Surgery at the Icahn School of Medicine at Mount Sinai. He is also a former faculty member of the New York Eye and Ear Infirmary.

Dr. Sadoughi grew up in Paris, France and graduated summa cum laude from the Pierre and Marie Curie Faculty of Medicine of Sorbonne University. His postgraduate training in otolaryngology began at the Paris-Descartes University, with a special emphasis on head and neck surgical oncology. After relocating to the United States, Dr. Sadoughi completed residency training in otorhinolaryngology-head and neck surgery at the Albert Einstein College of Medicine, where he also served for several years as a Research Associate and Project Coordinator for the Montefiore Otolaryngology Surgical Simulation Center. He subsequently pursued fellowship training in Laryngology and Neurolaryngology at the New York Center for Voice and Swallowing Disorders, under the mentorship of Dr. Andrew Blitzer.

Dr. Sadoughi is an active clinician, educator and researcher, has authored more than 40 peer-reviewed publications and textbook chapters, and has presented his scholarly work nationally and internationally. His clinical and research interests include organ preservation in laryngeal cancer, care of the professional voice, minimally invasive surgery of the larynx, and neural modulation of laryngeal function. He is the recipient of numerous accolades and awards, including the Maxwell Abramson Memorial Award for Excellence in Teaching and Service, awarded to him by the graduate otolaryngology staff of NewYork-Presbyterian Hospital, Columbia University and Weill Cornell Medical College. Dr. Sadoughi is a Diplomate of the American Board of Otolaryngology-Head and Neck Surgery, a Fellow of the American College of Surgeons and the American Academy of Otolaryngology-Head and Neck Surgery, and a member of the American Laryngological Association, the American Broncho-Esophagological Association, and the Triological Society.