Bachelor of Music, Vocal Performance - The Crane School of Music 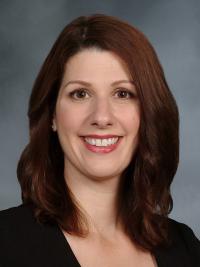 Christine Estes, MM, MA, CCC-SLP is a speech-language pathologist who specializes in the treatment of voice disorders, including phonotraumatic injury, neurological voice disorders, upper airway disorders, and care of the professional voice. Christine developed an interest in the anatomy and physiology of the voice while earning a Bachelor’s Degree in Vocal Performance from the Crane School of Music and a Master’s Degree in Opera Performance from McGill University. To further her knowledge of the voice and voice disorders, she earned a Master’s Degree in Speech-Language Pathology from Hofstra University, where she later returned in the role of Adjunct Instructor of Voice Disorders. She is involved in clinical research for the Sean Parker Institute for the Voice, and several of her studies have been published and presented at international conferences and educational programs. An experienced performer, clinician, educator, researcher, and presenter, Christine enjoys being an active part of the medical and performing arts communities, collaborating with performers, voice teachers, and medical professionals to foster an multidisciplinary approach to vocal rehabilitation.